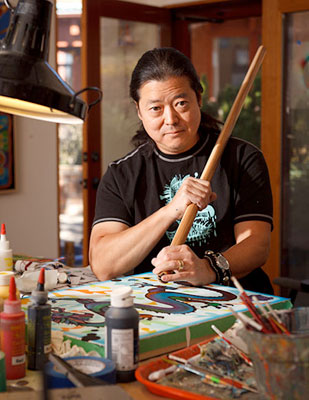 Award winning artist Joel Nakamura is known for his unique style: a blend of folk art and sophisticated iconography rendered in a neo-primitive technique. He is chosen for many of his commissions for his knowledge of tribal art, mythology, and for his ability to convey stories and information in an intricate and engaging manner.

Nakamura’s ability to render humanity in such primal, edgy hues has captured the attention of clients like Time Magazine, US News & World Report, and the Los Angeles Times. His paintings have enlivened the pages of many other books and publications, as well as the 2002 Winter Olympics opening and closing ceremonies programs. Nakamura has been profiled in Communication Arts, Step Inside Design, Confetti and Southwest Art magazines. He is proud to be the recipient of over two hundred awards of excellence.

Nakamura splits his time between commercial and fine art projects. His work is in numerous private and corporate collections, including Wynonna Judd, Chick Corea, and US embassies around the world.

Nakamura resides in Santa Fe, New Mexico with his wife Kathleen and children Paloma and Kai.