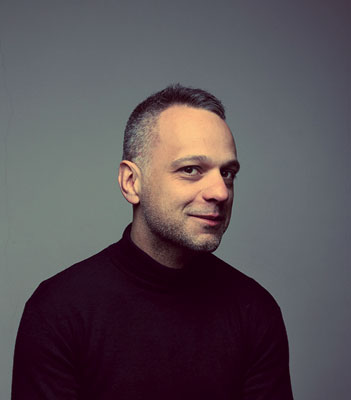 Lucio was born in Venice in 1976. Here is a little profile in his own words:

From 2000 to 2003 I have been active at Fabrica, the communication research center of Benetton group, at Visual Communication and Comics & Illustration departments.  I have contributed to the realization of “Vision of Hope” project for The New Yorker magazine, and collaborated with La Biennale di Venezia in the care of promotional materials for international festivals.

My work has been exhibited in group exhibitions in Tokyo, Osaka, Barcelona, Paris.  I was selected and included in the international catalog American Illustrator No. 29, for the best work of the year 2009.  My first personal exhibition was “La gemella diversa” at the Fondazione Bevilacqua La Masa in Venice (2010).

I created and designed a line of characters on behalf of Invicta and I take care of advertising materials for Helly Hansen workwear, Carhartt workwear, Brionvega.  I created the dog “Oscar” for Oscar Mondadori taking care of promotional materials and the TV commercial (2012).

My works have been commissioned by Fiat, Corio Shopville International Cranes and the Armando Testa agency in Milan.  I collaborate with the City of Venice as an illustrator, creating advertising posters for various festivals and cultural events. On behalf of La Biennale di Venezia I created and edited the advertising and promotional materials of various international festivals.

I made animated shorts for Venice Film Meeting (2008) and “Venezia cartoline inedite” (2010).  I collaborated with director Enzo D’Alo and artist Lorenzo Mattotti the creation of landscapes of the animated feature “Pinocchio” (2011).  “Grukey Card” was selected at International Motion Art Award in New York as one of the best animated videos of 2012.